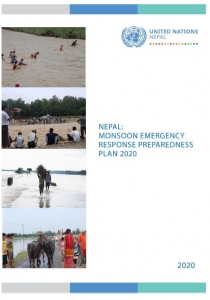 Nepal is generally categorized into three geographical zones – the Terai, Hill and Mountain areas. The Hills and Mountains are highly susceptible to landslides and debris flows, including those caused by landslide damming, excessive erosion of hill slopes and rock falls. The monsoon season typically leads to a spike in landslides and related mortality and morbidity in Hill and Mountain areas. The flat plains of the Terai are at the highest risk of flooding. Some years are worse than others. In 2017, approximately 1.7 million people across the Terai were affected by monsoon floods including 169 deaths and 460,000 people temporarily displaced from their homes. Economic losses were significant amounting to US$705 million.

This Humanitarian Country Team Contingency Plan is based on historical trend analysis which estimates that should flooding occur under the current forecast conditions, and the total affected population could be 1.26 million. This represents the total population in the areas at risk of flooding.