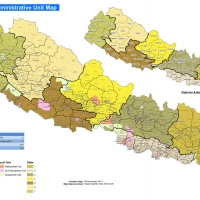 Provincial profile provide credible data in a timely manner for decision makers well as anticipates needs in a response.

Municipal profiles provide credible data in a timely manner for decision makers as well as anticipates needs in a response.

The Disaster Risk and Management Act, 2017 of Government of Nepal (GON) is the first Act so far that recognizes earthquake, fire, storm, flood, landslide, heavy rainfall, drought, famine and epidemics as disaster. It focuses on protecting public life, public and private property, natural and cultural heritages, physical properties and minimising the disaster risk.

The Transformative Agenda  of the Inter-Agency Standing Committee (IASC) stresses the priority of emergency response preparedness (ERP) on both the programmatic and financial side, which was reemphasized by the Agenda for Humanity The IASC ERP guidelines aim “to optimise the speed and volume of critical assistance delivered immediately after the onset of a humanitarian emergency.

Nepal is a disaster-prone country, and the United Nations in Nepal focuses on monsoon ERP and earthquake ERP in particular. It is critical within ERP to collect and analyse data to inform about risks and to facilitate efficient planning, which is supported by the following information products:

Stockpile master sheet for monsoon preparedness can be downloaded here